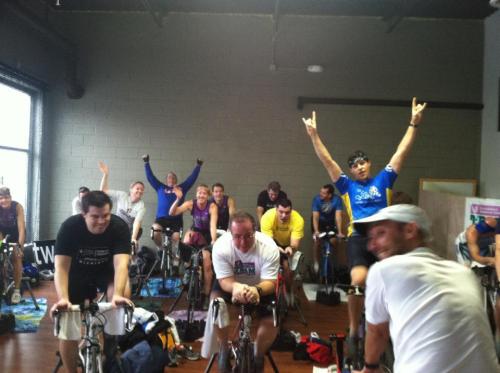 Spinning at Tweak in Birmingham. You might recognize the joker in front with the arms up in the air.

Rock climbed Wednesday. Took an hour long spinning class Thursday. Swam about 2600 meters Friday. Spun another hour and ran 1.5 miles on Saturday at the group training. I haven’t been strictly observing the weekday training schedule; in general I find the spinning classes at the gym, long weekend runs, and repeating the swim set from the week quite enough. Apparently it was a recovery week, hence the short run at the group training. I’m not used to running that short of a distance but it was for the best as there was about a half inch of snow on the ground. It was the first time I’ve run in the Vibram FiveFingers with that much snow. The sidewalks were mostly clear but there were a few places where no salt had been thrown down yet and a few icy patches on the road. I was fine for most of the run but then ran through some wetness in the parking lot at the end of the run and boy did my toes get cold!

Thank you to all who have donated so far! In addition to the $1300 that has been donated online to date, I’ve had about $843 donated by check and another $200 due to corporate matching for a total of $2343! For those of you who have written checks in the past month, I submitted them for processing on Saturday, so they should clear within the next week or so. If you haven’t donated yet, you still have until the triathlon at the end of April to donate, but it’s always nicer to do it sooner to save me the stress of wondering if I’ll meet my goal.

I have a few fundraising efforts underway at this point. There’s a poker tournament at Overtyme in Waterford this Saturday at noon that a fellow triathlon participant is hosting. The entry fee is $30 and I get $10 for every ticket I sell to it, so let me know if you want to go! There are about $4000 in prizes (both for placement and just door prizes), so there’s a good chance you’ll walk away with something even if you don’t do well in the tournament. I also had a meeting on Monday with the participant I’m organizing the beer tasting fundraiser in March to discuss more details. Should be fun!

Last but not least, the TNT Hike season is about to begin. This season’s destination hike is at the Grand Canyon on May 19th. We’ve got info sessions this week followed by the kick-off meeting next Thursday. Between the triathlon training and hike coaching, the next 5 months are going to be busy for me! If you’re interested in joining, please contact the TNT office at 248.581.3942 or go to teamintraining.org/mi.

I just found out that the 28-year old woman who was the original inspiration for the founding of the Team in Training program 23 years ago completed her first half marathon yesterday at Disney World through Team in Training. Since its inception, the Team in Training has raised over $1.2 billion to fund research and services for those with blood cancer. Awesome! 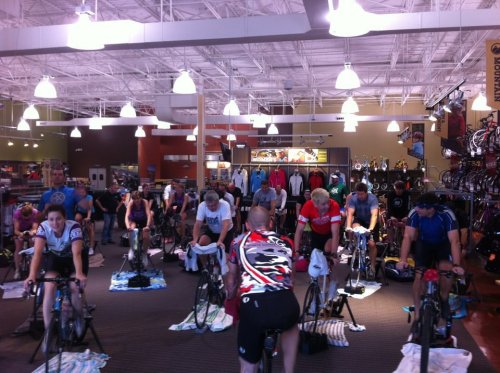 Spinning at Performance Bike on my new trainer (Thanks mom- & dad-in-law :)) I’m on the far right… the only one still riding a mountain bike! 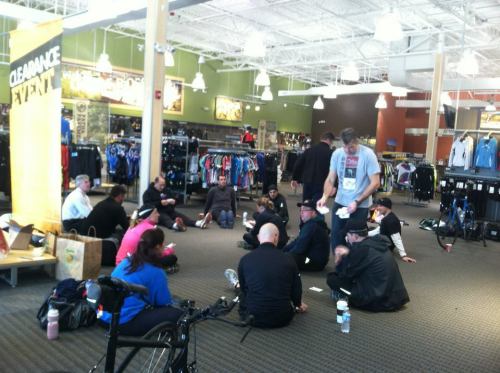 Yesterday we had an hour of spinning that included several power sets (hard effort, fast cadence) and a 15-minute endurance set at one gear higher than we expect to during the race. After the spinning we changed quickly into our running clothes and headed outdoors for a 2.5 mile run. Since we didn’t have any bike/run trainings over the holidays I’ve run several long distance runs for the past few weeks ranging between 6-10.5 miles. I didn’t think that the 2.5 mile run was going to be much of a thing but I was definitely feeling it the whole time. I don’t know if it was the biking before hand or the fact that I was trying to keep pace with some of the faster runners in the group, but I was really struggling to keep up.

I also swam another 200-yard marker set earlier this week. My time for the first marker set at the beginning of the season was 3:48 average. This past week I swam 3:29 average… about an 8% improvement! Now, it’s not exactly comparing apples to apples since I’ve started swimming in a pair of jammers instead of my old swim trunks. I’d like to believe at least half of that is due to the training. 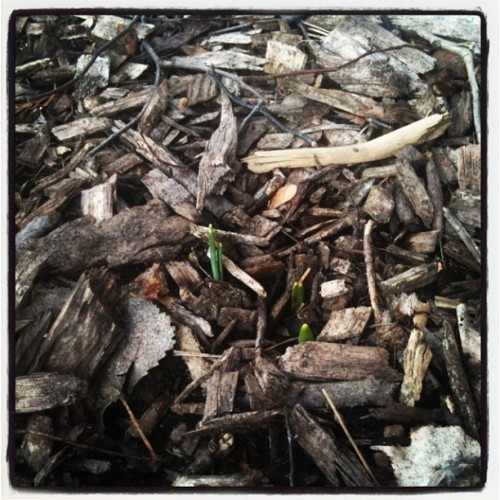